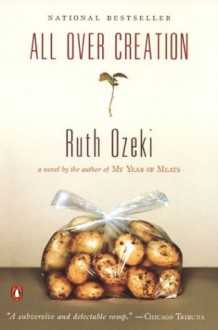 “Lloyd’s home, Mom.” I fingered the straggling ends of my mother’s hair. And your daughter is having a nervous breakdown. And there’s a caravan of hippies camping out behind the barn. Oh, and you’re a prophet of the Revolution.”

All Over Creation is probably Ruth Ozeki’s weakest book to date, and yet, I devoured it in just one hung-over weekend.

I’m not going to say much about the plot other than that it is the story of a family who split apart over a matter of principle and who are slowly coming to terms with each other, life, illness, death, and all the things around them.

Whilst Ozeki’s writing is for the most part wonderful, I felt that All Over Creation was trying too hard to accomplish two things:

1. home in on the environmental message of the book; and

2. dwell on scenes and descriptions for dramatic effect.

The book did not need to do this and there were a few scenes where I felt that less would have been more – especially at the end.

However, I was moved and engaged, and it made me laugh and provided all “the feelz”, and I will not hold the over-kill of emotional writing on a handful of scenes against the rest of a book that clearly engages a more intellectual appreciation for the way Ozeki formed her characters and gave them voices that are so real that I had no trouble imagining them.

“But they’re ours. We have to keep them safe!” She shook her head. “No. Keeping is not safe. Keeping is danger. Only safe way is letting go. Giving everything away. Freely. Freely.”