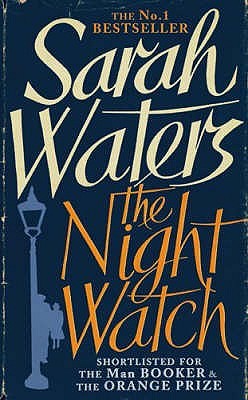 “She went down the steps and started to walk. She stepped like a person who knew exactly where they were going, and why they were going there— though the fact was, she had nothing to do, and no one to visit , no one to see. Her day was a blank, like all of her days. She might have been inventing the ground she walked on, laboriously, with every step.”

The Night Watch was not what I expected. I don’t like war time stories. There is very little I enjoy about the gory detail or historical arrogance that often accompanies war time stories. Instead The Night Watch, although set in London between 1941 and 1947, did not focus on the war but explored the stories of a small group of individuals whose fates intertwine by chance against the backdrop of the London bombings.
And as it turns out, The Night Watch is one of the finest character studies I have ever encountered.

In fact, I guess the story could have been written against the backdrop of other eras and other societies and still maintain its relevance as a depiction of the struggle of moral integrity surrounded by betrayal – however small it may be – and of acts of kindness in a world of destruction.

“She supposed that houses, after all – like the lives that were lived in them – were mostly made of space. It was the spaces, in fact, which counted, rather than the bricks. “

As with Waters’ other books, the writing is compelling. The pace of the narration thrives on detail. Detail is important.

“Helen opened her eyes and gazed into the luminous blue of the sky. Was it crazy, she wondered, to be as grateful as she felt now, for moments like this, in a world that had atomic bombs in it—and concentration camps, and gas chambers? People were still tearing each other into pieces. There was still murder, starvation, unrest, in Poland, Palestine, India—God knew where else. Britain itself was sliding into bankruptcy and decay. Was it a kind of idiocy or selfishness, to want to be able to give yourself over to the trifles: to the parp of the Regent’s Park Band; to the sun on your face, the prickle of grass beneath your heels, the movement of cloudy beer in your veins, the secret closeness of your lover? Or were those trifles all you had? Oughtn’t you, precisely, to preserve them? To make little crystal drops of them, that you could keep, like charms on a bracelet, to tell against danger when next it came? “

I do not often re-read books, but this one will be one of the few that I will be sure to come back to. It is also one of those very few books where I really wish the main character was real.